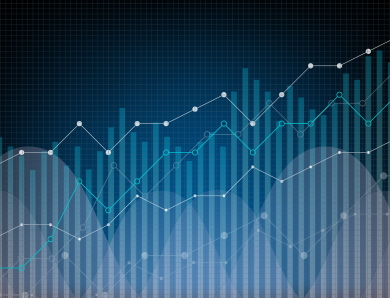 Barbara Murphy, Vice President of Marketing at WekaIO, addresses how WekaFS overcomes the performance and latency challenges in the Financial Services industry in this third and last blog of a three-part series. This third part of the series is titled “Weka, HPE, and Kx Systems Set 17 New STAC-M3 Records”.

Recently Weka and HPE recently made a submission for public audit with the Securities Technology Analysis Center (STAC) using the STAC-M3™ benchmark test suite.  The STAC-M3 benchmark measures performance for integrated solutions that enable high-speed financial analytics using a time-series database. The STAC-M3 Antuco and Kanaga Benchmark Suites are the industry standard for testing solutions that enable high-speed analytics on time series data, such as tick database stacks. The STAC-M3 benchmark captures the end-to-end solution including database software, compute resources, networking, and storage systems, enabling the STAC council members to critically compare results with benchmarked solutions from other vendors. The baseline suite – Antuco – uses a limited data set size with constraints to simulate performance against a full-size data set residing mostly on non-volatile media. It tests a wide range of compute-bound and storage-bound operations to probe the strengths and weaknesses of each stack. The scaling suite – Kanaga – uses a subset of Antuco queries without constraints against a significantly larger data set. For the same operation, the benchmarks vary the numbers of concurrent requests and the size of the data subset.

Diving further into the new records that were set, the benchmark results highlight how well the SUT performs in high concurrency, I/O intensive Antuco and Kanaga data sets. The most demanding storage stress test comes from the STAC-M3 VWAB-12DaysNoOverlap benchmark with 100 client threads.  This test executes a 4-hour volume-weighted bid over 12 days for 1% of symbols with no overlap, for a full year of data. The following chart (Figure 1) shows how WekaFS with HPE servers outperformed a publicly disclosed result from a SAN based solution, an all flash NAS solution and a direct attached Optane SSD based solution, by up to 280% for a single year benchmark. 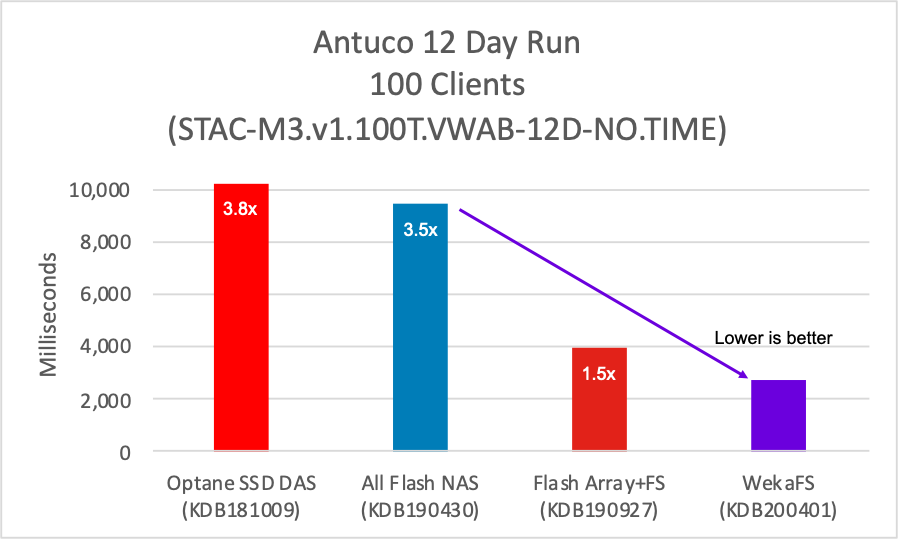 The next benchmark is similar to the VWAB-12DaysNoOverlap benchmark with the addition that it varies the number of concurrent client threads, operates over multiple years of the Kanaga data set rather than within a single year, and the dates and symbols are chosen so as to ensure heavy overlap among requests. The following chart (Figure 2) highlights how a scalable distributed file system delivers significantly higher performance compared to a direct attached server solution when the data sets get larger. 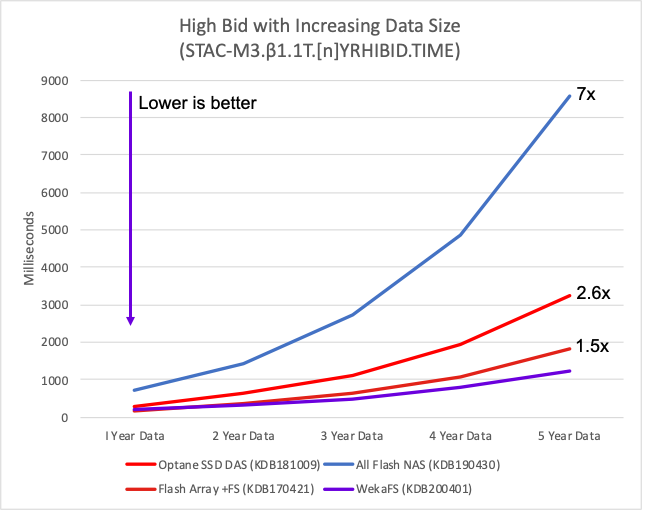 Finally the joint Weka, HPE and Kx Systems solution did a clean sweep of all Kanaga throughput benchmarks. The SUT outperformed all publicly disclosed results in 5 out of 5 Kanaga STAC-M3.β1.1T.*.BPS benchmark runs. The storage system had a combined performance density of up to 113GB/sec available bandwidth to the client nodes, a maximum observed read throughput of 54.7GB/sec* in Kanaga 5-year high bid throughput benchmark (STAC-M3.β1.1T.5YRHIBID.BPS), and 8.8 million 4K IOPS in 10U, with the ability to fully distribute data, metadata, and system services.

Weka has developed a shared file system, WekaFS, that delivers extreme performance at low latency to support the demanding scale and demanding performance requirements of modern, data intensive applications, whether run on-premises or in a public or private cloud. WekaFS is a software suite that runs on industry standard x86 servers and has partnered with HPE to deliver the best-of-breed engineered solutions on HPE server platforms.

Weka and HPE have worked together to create qualified solutions that have been thoroughly tested and validated for field reliability. Delivering the same experience as a traditional storage appliance-based approach, this engineered solution is architected using best-in-breed technologies that include the WekaFS file system software, HPE ProLiant XL170r Gen10 servers, and Mellanox’s network adapters. The HPE ProLiant XL170r Gen10 servers offer an optimized NVMe platform with a balance of flash density and low-latency network bandwidth to ensure maximum performance to every drive. The platform boosts high performance computing (HPC) speed with accelerators, low-latency interconnects, and fast HPC clustering that is cost-effective in any configuration. The single-port Mellanox adapters in the SUT used InfiniBand EDR. Other supported networking options using Mellanox technology include Ethernet and dual-port adapters. These adapters deliver up to 100Gb/s bandwidth, the lowest latency available, and application hardware offloads, satisfying even the most demanding application requirements.

The loosely coupled, physically distributed compute-and-memory nodes of today’s high-end clusters compound daunting data analytics problems with I/O bottlenecks that can slow solution times to a crawl. These workloads need ultrafast communication among processing elements and between processing elements and memory. High Performance Data Analytics, such as quantitative analytics require high performance storage and compute systems rather than standard HPC infrastructure. The drivers behind this need for high performance systems are the organic growth of data-intensive simulation and the need to process data analytics workloads that are too complex and time-critical for enterprise IT technology to handle alone. The results of the STAC M3 benchmark prove that the combined solution of Weka on HPE servers running the Kx Systems kdb+ database is the ideal solution to handle these taxing workloads.

For more information, go to:

Blog: What is the STAC M-3 Benchmark and Why Should You Care?